See, all the best and brightest do move overseas.

New Zealand is a great place to live, if you are not ambitious and you are not driven by a need for material things.

You probably never will get rich in New Zealand. Or even be able to pay off your student loans.

One in five Kiwis have left New Zealand for greener pastures overseas. And Australia is one place that Kiwis go, as NZ citizens have the right to live and work there.

Last week, my husband was offered a promotion in Brisbane. A big step up on his career path, and the salary would be like THREE TIMES what he makes now. In Australian dollars.

And I actually like Australians. Sometimes I wind my husband up by telling him how much I like the Aussie accent.

Anyway, then we saw that story on 60 Minutes about Paul de Gelder, the navy diver, who was attacked by a shark in Sydney Harbour (and lived).

All of a sudden, New Zealand seemed pretty darn good. We’re broke and we can't afford to buy a house, but we have better lamb and cheese. We can swim in the harbour and the sea. There are no snakes and no crocodiles. Just a few Australian spiders. The possum is not protected. And the child can wander into the bush with no worries.

Well, the child could get lost in the bush, and we never would be able to find him, but at least he would not get attacked by a croc. 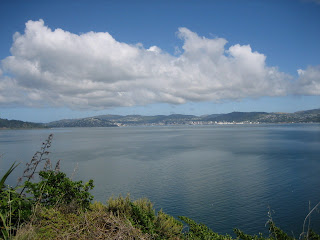 Wellington Harbour, in March.
Posted by Juli at 9:34 AM

We're staying in NZ. Until someone makes us an offer that we just can't refuse.

Although we have dangerous animals in Australia the risk of a fatal attack is extremely low,most Australians don't live any where near crocs' natural habitats.The attack in the report occurred in unusual circumstances(floods),unless you're very unlucky or trying for the Darwin Award you're safe. There's no real wildlife in NZ,so Kiwis are just envious when they exaggerate the danger.

I wouldn't say that I'm envious, since I used to live in a country with snakes, crocs and other large predators. I just don't miss that sort of wildlife. And I like how there are no real threats in NZ. But I'll admit to exaggerating the dangers of having an encounter in OZ. Guilty!