I miss my granny, RIP.

Yesterday would have been my granny's birthday. I miss her.

Here is a photo of my granny, me, and my mother, 10 years ago, at my parents' house in Ohio. 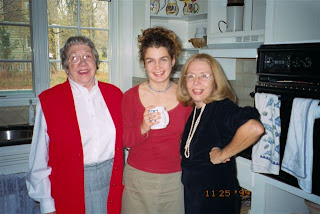 The Grapes of Wrath.

For the last few years, I have been having recurring nightmares about John Steinbeck's The Grapes of Wrath. One of my fears is someday I will have to read this book again. I had to read it once in high school, and twice (so far) in grad school. I agree with the social politics, but it is still a heart-wrenching story, full of heavy symbolism.

The Grapes of Wrath was published in 1939. The novel is set in America during the Great Depression and is about the plight of sharecroppers who are driven from their home by economic hardship.

We can draw historical parallels between 1939 and 2009. I wonder, where have the people who recently lost their homes gone? Those people must have packed their belongings in their cars, and travelled to new places, to try to make fresh starts.

What have those people found when they reached the new places? Are there jobs? Are those vulnerable people being exploited? Are corporations more powerful than the American government?

The Grapes of Wrath is almost like an earlier version of Cormac McCarthy’s The Road, a novel that I liked a lot. The Road is a post-apocalyptic vision about the transcendence of love and hopefulness of faith. (I'm afraid to see the movie. I think it will haunt me even more than the book.)

I am a bleeding heart.

Like a lot of bleeding heart liberals, I feel the issues. I am emotional about my point of view.

The night George W. Bush was “elected” (the first time), I cried. CRIED. Even though we had to wait for Florida to “fix” the chads on the ballots. I just knew we were returning to the dark days of Ronald Reagan and George the father.

When the US went to war in Iraq (in 2003), I had a nervous breakdown. I put my disaster supplies in the trunk of my car. I was ready for the apocalypse.

I was just discussing US politics with my high school crush. (We were reunited by Facebook—it’s so magical.) I was upset to find out he's now a moderate Republican. (He's against the health bill and against any stimulus for job creation.) He replied:

I am surprised by your visceral reaction.

I know, he's amazing. But in my mind, he's like Anakin Skywalker when he goes to the dark side in "Revenge of the Sith". 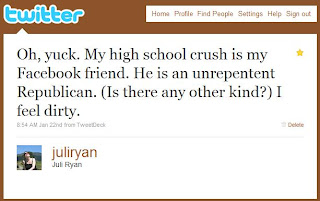 I was so upset that I misspelled "unrepentant".

- -
Edited to add: My high school crush is actually an "independent" who is worried about the deficit. Same difference.
Posted by Juli at 8:46 AM 10 comments:

Email ThisBlogThis!Share to TwitterShare to FacebookShare to Pinterest
Labels: backstory, blogging and social media, I want to know why., movies, soapbox

My vagina and I hate thrush. 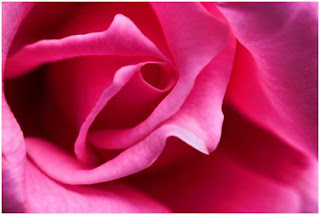 You see, I am just now getting over The Worst Yeast Infection Ever. (American for thrush.)

I never used to get yeast infections. But when I fell pregnant, my vagina and I were invaded by thrush. And since the child was born, once or twice a year, my vagina and I have been plagued by that uninvited guest. Thrush.

So I’m going to take acidophilus tablets. And not just for a week or two, like before. Because my vagina and I don't want to go through this again. Ladies, I took to my bed. And not in a sexy way. I did not have a man cold.

While I was lying in bed, airing out my vagina, I did what any of us would do. I consulted the internet:

Most yeast infections are treatable and result in minimal complications such as redness, itching and discomfort.

Minimal? Obviously, the person who wrote this web MD crap is a man. Itching that makes me want to rip off my labia is not minimal. Discomfort that makes it impossible to walk around (without moaning in agony) is called pain.

My mother used to tell me I have a low pain threshold. (I do.) But my mother could be a Scientologist. All I have ever done is push a child out of my vagina, without drugs. And so what if (after 40 hours of labour) I really wanted the drugs? It was too late. Anyway, I found out my pain threshold is much higher than my mother thought. Or I am stupid for not demanding drugs sooner.

I digress. My point is, a yeast infection is not a man cold. If men had vaginas, their yeast infections would require painkillers, and a possible hospital stay. They would not need to insert messy gloop into their vaginas, and then just get on with things. And they wouldn’t bother with homeopathic remedies that might (or might not) work. In a month.

Apply yoghurt to the areas affected by the irritation.

Let's get real. I guess I should be thankful I can buy a thrush remedy over the counter. My vagina and I are now basking in almost yeast-free comfort.

P.S. Look out for my upcoming posts: Men and Menstruation—If Men Had Periods, and More Men Should Wear Bras.

The other night, we were watching TV. I flicked over to the movie channel, and “Grease” was on.

Me: I’m not going to watch the whole thing.

I have watched “Grease” so many times. One summer, when I was 11 or 12 years old, I watched it every day. I loved Australia’s Olivia Newton-John, as good girl Sandy.

Now I am hooked on Stockard Channing’s Betty Rizzo. I like when she sings “There Are Worse Things I Could Do”.

The Wizard of Oz.

I have been inspired by Blonde Episodes and Lights! Camera! Diapers! So, I am starting a new thing on Wellington Road. Movie reviews!

(For the truly interested, check me out on Flixster--I'm a SuperReviewer!)

At Wellington Road, we just watch whatever is on telly. (Because we are tired.)

On New Year’s Eve, we ended up watching "The Wizard of Oz" (with Judy Garland).

Flixster - Share Movies
I suppose everyone exposes their children to the magic of "The Wizard of Oz". But watching it through Mr 4’s eyes really was magical.

For example, Mr 4 thought it was funny to see individual things (like a cow) flying by Dorothy’s window in the tornado, and he picked up straight away that Miss Gulch is the witch. He thought the Munchkins were made of wood (No, honey, they were real people.). He tapped his foot to “Ding-Dong! The Witch Is Dead”. He wondered with Dorothy which way to go on the yellow brick road (just before she meets the Scarecrow). And he loved what the water did to the Wicked Witch of the West.

"The Wizard of Oz" was released in 1939. When I was a kid, it was one of my favourite movies, and I have watched it dozens of times. I love the humour and the sense of menace, and also the glimpse of old Hollywood. I think this movie touches something primal in all of us.

From the antipodean perspective: when Adam was a kid, he thought Oz was in Australia!