So, mentally I am a teenage girl. I have been reading the Twilight books. Go ahead and think less of me, but I really like them. I have read them each in a day or two, and I just can’t put them down.

My favourite is the third book, Eclipse. It is about a girl who has to choose between two guys in opposing worlds. My husband is totally like Jacob (the werewolf). But who can resist Edward--vampires are so very appealing.

The writing is terrible. It is full of clichés. Stephanie Meyer clearly has a way with words and a decent vocabulary and is a skilled storyteller, so it “breaks my heart” to read through so much cheese for every genuine moment.

You will see almost every twist of the plot coming. Meyer doesn’t make the most interesting choices, which is a let-down time and again. And she seriously needs to edit and polish and not make the first draft her final one.

Then again, she is a bestselling novelist. What do I know. 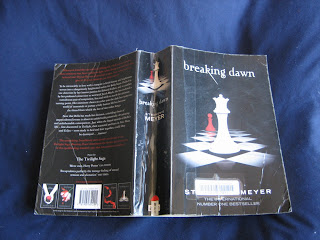 150 pages to go. Bracing myself for the disappointing finale.
Posted by Juli at 10:37 AM 2 comments:

Hiding behind the curtains.

When the sun goes down in NZ, nearly everyone closes the curtains. I think it's for privacy.

My husband says, no, it is for warmth, because almost no one has double-glazed windows.

But everyone who pops in at Wellington Road seems surprised by our neighbour’s house. Because we can look right into her open-plan lounge and kitchen.

My husband says people are shocked because they are not up with modern design. And it is nice that our neighbour can look out of her house, rather than being surrounded by four walls.

But he is very sure. She doesn’t have double-glazed windows.

So I think our neighbour is an exhibitionist. And I like it. 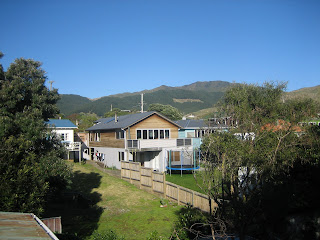 This house looks a million times better since she moved in.
Posted by Juli at 4:26 PM 3 comments:

What the child is saying.

Wipe my bottom. Obviously, this is something you only want to hear from someone you gave birth to. I warned the child that when he goes to school, he will need to wipe his own bottom. And he looked at me like, I will totally hold it until I get home.

Food! Food! Food! The child tweets like a little bird when he needs something to eat.

Have a nice day, Dad. The child says this as my husband heads out the door to work. It is just as sweet as I love you.

That’s not my name. My name is Jet. Um, okay. And let me guess, you’re a Transformer? I think my husband let the child watch the Transformers to get back at me. Because robots in disguise? I don’t get it.

Do you want some cuddles? You would have to have a heart of stone to say no to this. Although sometimes the child’s timing is a little off, like when I have my hands full of pizza dough, or I’m sitting on the toilet. Yeah, we’ll have to work on that.
Posted by Juli at 12:48 PM 4 comments:

Email ThisBlogThis!Share to TwitterShare to FacebookShare to Pinterest
Labels: parenting

My first cup of pumpkin soup was made from a packet, in a household that had never seen a fresh vegetable.
Making pumpkin soup from fresh vegetables makes all the difference. My husband cuts up the pumpkin for me. However, I believe that my experience with carving jack-o-lanterns will probably come in handy, if it's ever put to the test.
Roasted pumpkin soup
1 small pumpkin, cut in chunks and peeled
Salt and freshly ground black pepper
1 tbsp olive oil
1 large onion, chopped
2 cloves garlic, crushed
1 tbsp finely grated fresh ginger
½ tsp ground turmeric
3 cups chicken stock, heated
½ cup coconut cream
1 tbsp sweet chilli sauce
1 tsp grated lemon zest
Heat oven to 200 C. Place pumpkin in oven pan and sprinkle with salt and pepper. Roast for 30 minutes until soft.
Heat olive oil in a large saucepan over low heat and add onion, garlic, ginger, turmeric. Cook until soft (5-10 minutes). Add pumpkin and stock and bring to boil, then turn down the heat and simmer for 10 minutes. Remove from heat and cool.
Blend soup until smooth. Return to saucepan and reheat. Stir in coconut cream, sweet chilli sauce and lemon zest. Season to taste. 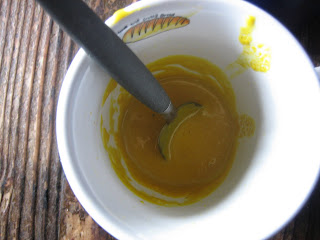 Not a complete failure. The child did eat the roasted pumpkin.
Posted by Juli at 8:04 PM 4 comments:

Last week one of the local papers reported another burglary in the village. $1,000 in cash was allegedly stolen from someone’s house.

This sounds suspicious. Like maybe someone is making an insurance claim.

At Wellington Road, burglars would be lucky to find $20.
Posted by Juli at 9:48 PM 4 comments:

My glass is always half empty (but not on the inside).

In my last post I forgot to mention all the AMAZING things about living in New Zealand. I am truly the luckiest woman in the world to live in NZ, and to have had such an easy time gaining residency, and my husband is totally a saint for putting up with me. And I have the most angelic son.

I get to look at the sea from my bedroom window. The sea is maybe 100 metres away. And in the middle of winter, my son and I can play in the garden, and actually be too hot. Every day we have beautiful, healthy food to eat. And we have social welfare, such as healthcare for everyone. And only 4 million people to share it all with.

Yeah, it’s a good life. I just point out the negatives to keep it unspoilt. Do come and spend your tourist dollars. But don’t stay too long. Unless you are family, or you have skills and you are in great health and you are willing to work for less.

My country, ‘tis of thee.

As the war in Iraq began, I was not happy with the way things were going in the US. I was living in liberal San Francisco, but I still felt disenfranchised. I was even called un-American.

I had been to visit New Zealand, and I decided to return.

But when I did, I wasn’t sure that the remote, provincial paradise was the place for me. Our house was cold, I had to step back a few rungs in the workplace, and it was difficult to make friends with the insular Kiwis.

During those long Bush years, there was palpable anti-American sentiment in NZ. And a lot of it seemed to be directed at me. Kiwis mocked my accent, denounced my customs as too American, and made anti-American jokes.

But I didn’t reach out to other American expats. In my first five years in NZ, I didn’t meet any Yanks at work or over the Internet. And I certainly didn't want to meet them through the US Embassy.

Not only did I feel ashamed of my government’s policies, I was also embarrassed by the entitled brash arrogance of my people. The ugly Americans.

Things have changed. I have met some wonderful Americans living in the village. I'm enjoying some earnest American expat blogs. And I’m relieved to be so much happier about the direction my country seems to be headed.

I don’t watch Shortland Street, but I am a fan of New Zealand’s Outrageous Fortune.

It’s a local drama about a family of criminals who start trying to live an honest life. Sometimes it’s cheesy, but it’s often quite funny. And I like how the soundtrack features New Zealand music.

Rumour has it that a US version is in the works. I can't wait to see what the Yanks come up with.

Here’s the trailer for the fifth series, which is now airing in NZ.