We returned to New Zealand, from Texas and California, THE SAME DAY Mexico announced the swine flu outbreak.

Doesn’t all the media coverage seem a bit hysterical?

Let’s face it, getting sick is part of travelling around the world. In an airplane. No matter how many times you wash your hands.

The child came down with the flu over two weeks BEFORE the swine flu outbreak was announced, and I didn’t think much of it.

He had the flu. He stayed home until his symptoms went away. But he didn’t go to the doctor.

Now I’m wondering, what if. We had travelled through California and Texas. What if we had taken the child to the doctor, three weeks ago, and we had found out he had the swine flu? Could we have helped stop the pandemic?

Or is the swine flu outbreak more widespread than the WHO wants us to know.

We’ve been back in New Zealand for five days, and even though we have NO SYMPTOMS of flu, we have pretty much isolated ourselves.

I don’t want any fingers pointed at us, for example, at the playcentre, if babies come down with the flu.

I believe in quarantines.

Any excuse to order groceries online will do.
Posted by Juli at 7:57 AM 1 comment:

Our gamble paid off.

We arrived in LA at midnight. The child had slept on the red-eye, and miraculously he went right back to sleep when we got to our LAX hotel.

And at our hotel there were ponga trees.

Check out my review over at TripAdvisor. 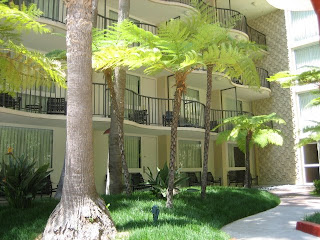 We felt right at home.

I am an amateur. My photo was chosen for the newly released seventh edition of the Schmap Wellington Guide.

Dozens of other photos by more talented photographers were also published.

HUSBAND: Did they pay you?

The Schmap is a cool little guide. You can check it out here.

Before we landed in America, I was having romantic fantasies about what my arrival would be like.

It would be like Top Gun. My fighter jet would land on the aircraft carrier, and my commanding officer would say, welcome home, Maverick.

So it was wonderful and strange to find myself back in America. I understood most of the cultural references and people understood me.

But when people asked where I was from, I said, New Zealand. My husband would crack up, laughing, and I would be all, but I am! I am a Kiwi.

When we returned home to New Zealand, the immigration officer asked, how was your trip home.

And I was totally confused.

Because for me, now New Zealand is home. 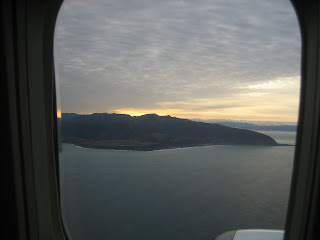 I live to eat.

We have been enjoying Gulf pinks and grouper and of course key lime pie.

You can check out my reviews of these fine establishments over at TripAdvisor. 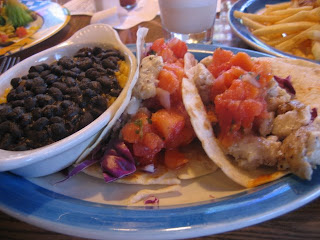 It’s a rude awakening to return to America, and to find everyone’s hand held out for a gratuity.

In Santa Monica we realized that we are a DIY family. We prefer to do things ourselves. We don't like being waited on.

I guess we are a motel family. We need a kitchenette, not room service.

I don’t like being addressed as “Ms. Ryan.” To me, it seems deferential. The only way I feel okay with it is if I’m also addressing you as Missus, Miss, or Mister.

At our hotel, I was offended by the guests’ sense of entitlement. They were demanding, and they received more attention because of it. I cringed as guests talked down to the hotel staff (ie, “My wife is in the exercise room and she needs a cold water. Get it for her NOW!”). I was embarrassed.

Here’s my review of our hotel over at TripAdvisor.
Posted by Juli at 12:28 AM No comments:

I didn’t realize that the Dallas metropolitan area is so big (the population is over 6 million). Flying into the city at night is impressive.

I like the flat and the dry. And of course we are used to the wind. 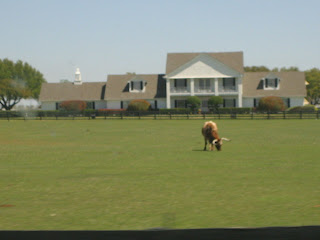 We are much more tired than we thought we would be.

I have a new respect for all of you who have travelled around the world with a four-year-old.

Don't get me wrong. The child has been coping very well.

It's the ways of air travel that have gotten me down.

Especially when the airline forgets the special meal for your child who is allergic to EVERYTHING. And you're not allowed to bring EFF ALL on the plane.

The child doesn't want to eat fruit and crackers when everyone else is having a hot meal.

And after being on the airplane for thirteen or whatever hours, the child doesn't want to stand in line for immigration and customs.

Of course, LA is so expensive. And even in the "walkable areas" in Santa Monica, you totally need a car.

At least the people we have met have been kind and helpful. Thank you, nice people.

And now, hopefully sleep. Because tomorrow's another day at the airport.

America, why did you have to be so big?
Posted by Juli at 8:47 PM No comments: