New Zealanders have a grudge against the French. For nuclear testing in the Pacific and the sinking of the Rainbow Warrior. Don't even mention the rugby.

So for the Kiwis, beating the French, at anything at all, is very satisfying.

In the past few weeks, there have been a couple stories comparing French and New Zealand wines. That's right, French wine. The best of the best.

And there was a story on Campbell Live about a French winemaker who came to New Zealand to learn a little something about winemaking.

These stories are examples of the Kiwi insecurity complex. If you visit New Zealand, you will notice, from practically the moment that you deplane, that Kiwis are asking you what you think of New Zealand. And they want to hear that New Zealand is world-class.

This low self-esteem comes from being a little country with big aspirations. A little country in the middle of nowhere. A sure way to rile up a Kiwi is to suggest that there are no world-class cities in New Zealand.

Luckily, with NZ wine, the claims of being world class are holding up well. Especially, in my opinion, for riesling, pinot noir and syrah. 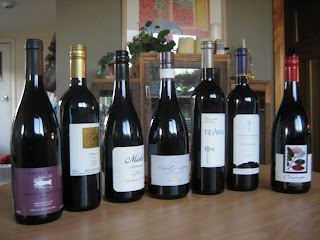 In my opinion, you can add sauvignon blanc. I always do!

I think Sauvignon Blanc has been over produced and as a result, the quality has suffered. Lots of critics disagree me with me, though.

I too have gone off Sav blanc.

It's changed, it's become to the noughties what liebfraumilch became to the seventies.

Gewurts is a good bet with some of the great asian food in welly, though.