Halloween is too American.

In previous years, when I have tried to get people interested in, say, a Halloween party with fancy dress (Kiwi for costumes), people have said, We don’t celebrate Halloween. It’s just too American.

Now their kids are older, and these very same people are like, We’re going to trick-or-treat. And did you know? Halloween is Irish, not American! Well, Halloween does have pagan roots. HELLO!

Halloween down under is just a bit silly, when the DAYS are getting longer, and all the flowers are blooming. It’s more like being in a fairy grotto than anything spooky. It would make so much more sense to have Halloween on 30 April.

For the last few years, I have played spooky music, dressed up as a witch, and jumped out and scared the 24 kids who stopped by to trick-or-treat. By the way, 24 is an epic number of beggars. So now I’ve got a reputation for celebrating Halloween. Hey, let’s go to that weird American lady’s house. I'm looking forward to a record turnout. I'd better go buy some lollies. 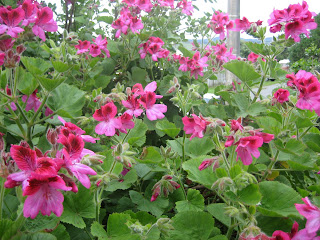 Happy Beltane all! We should, strictly speaking, be dancing round May poles in the southern hemisphere right now and celebrating fertility and the union of the God and Goddess!

I just wish Kiwis would give up on hitching themselves to celebrations at the wrong time of year.

If people want to do Halloween - wait till Autumn/Winter! It so does my head in every year!

And as for trick and treat... we never did it as youngsters in the seventies in the UK - it came in when I was a teenage, along with much hype.

We did the simple stuff, apple bobbing etc. Great, harmless fun. And lighting the candles to ward off any evil spirits - wooooooooo

I suppose being spring and all, a pumpkin must be hard to come by. The Halloween flowers are great though!

Have fun with the trick-or-treaters. Happy Halloween!

Sarah, I'm with you. I'm going to dress up as a scary fairy this year. And bob for apples in autumn.

Aliceson, I just bought a spring pumpkin, for five bucks!

Yeesh, I am so tired of hearing people complain that Halloween is an American holiday. Hello!?! Other countries celebrate Halloween too (like Canada!).

When I first moved here 5 years ago, people thought my Halloween excitement was kind of strange, and weren't afraid to tell me it was "too American" (I suppose all the fake cobwebs, dangling skeletons in the kitchen and pumpkin garlands along the walls were a bit over the top... haha). Now I've finally gotten into a more toned down Halloween routine... and my friends are throwing a big Halloween party?! I'm not complaining, though. Bring it on!

I am really disappointed, we didnt get any trick or treaters this year. I didnt feel spooky either. I agree we should celebrate in April instead.

I know, Halloween down here is just kind of weird. We had trick or treaters last night and it didn't seem right. It was still daylight for Christ's sake! I blame the internet.