Springtime can kill you.

Spring in NZ is like the second winter. Except I am trying to wear my spring clothes.

The fickle weather has turned rainy and cold, and I have cabin fever, and there are only a few sticks of firewood left.

Over the school holidays, I have been trapped. All the other mums seem to be full of energy. They are cleaning their houses from top to bottom, going on excursions every day, visiting extended family, and getting ready for Christmas. I feel so restless. I just want to fly away and be somewhere else.

Yesterday, I roused myself from my stupor, and a couple other mums and I took our kids to the museum in Wellington. There were a million people there. We looked at the exhibits inside for 30 minutes, and then we retreated to the cafe for lunch.

While we were in the cafe, we heard a rumour about another tsunami warning for Wellington. I was determined not to be neurotic. I’m not going to post any more silly status updates to Facebook, I said to myself. Because I have learned that people totally over-react.

So I texted Adam and asked him if he had heard about a tsunami warning. He hadn’t. He suggested that if we needed to, we could go to the top floor of the museum. Very funny, Adam.

One of the other mums was sort of freaking out too. She didn’t seem comforted at all when I said that a tsunami in Wellington would be like a snowstorm in Miami.

She said the wave could wrap around the North Island, and we agreed that it is the force of the wave, not the height. And we didn’t even have our civil defence supplies with us. And the museum is RIGHT ON THE HARBOUR.

The other mum called some of her geologist friends and asked them about the tsunami, but her friends didn’t reply.

Meanwhile, we were looking at the outdoor exhibits with the kids. I hesitated. I suppose I could ask Twitter, I said. 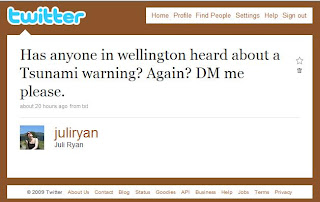 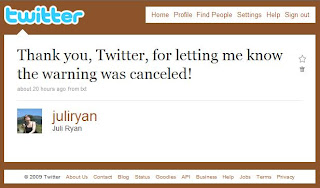 And then I was left once again to ponder important things like, is cancelled spelled with one or two L’s, and why does it seem like Jay McInerney is writing everyone else’s blog. Story of my life.
Posted by Juli at 9:47 AM

I'm so jealous that your experiencing spring time. Without the tsunamis of course. I couldn't imagine the anxiety involved with the unpredictable ocean and fault lines. Ugh!

It's supposed to be fall here but already were having freezing temps. I guess Mother Nature is playing tricks all around the globe.

This weather is horrid! I can't believe Metservice is telling me I need 6 layers of clothing to feel comfortable. And I've just gotten out all my spring clothes too! Sigh.

I wonder what a tsunami's effect would be on Te Papa? That building is like a giant brick... an oddly-shaped one.

He's not writing my blog, more's the pity.

ok, juli, i remember thinking way back in granville how outrageously smart you were (didn't you attend denison u while still in high school?), but reading "Wellington Road" i am blown away. you are a GREAT writer. if you aren't writing a book, get started. if you are in the middle of one, finish it. the prose is fluid and engaging, even as you write about your day to day experiences. it is easy to identify a great writer by how easily they transform the mundane into something important. you have this gift. thank you for giving it here in this format. i hope someday to curl up with your novel for my bedtime reading.

oh dear. "kell" is my wife, and i would go ahead and let you just think some "kell" out there loves the way you write, because what's the difference who said it, except i don't want you to be confused (or afraid) because i referenced a piece of your past. i am new to blogging (hear my dinosaur roar!), and published before i declared my identity, which i will do presently - jason sidwell. i graduated a year after you, i think. anyway, i wanted to send you a line or two of encouragement, as i hold good writing in high regard. there is so much garbage floating around in this net, its a thrill to accidently stumble upon a brightly colored fish.

I love Twitter for things like that. I was making a quiche once, and had no idea what to cook it in, and I asked Twitter and it told me: "A pie tin!" And the quiche was delicious. Another happy ending.