"I wanna talk about how bad you make this room look.
I never knew what a dump it was until you came in here."
-Crazy Heart, 2009


A few months ago I reconnected with a very old friend. Recently separated from his wife and pretty wounded, but I was still optimistic because we've always been attracted to each other. We go back 20 years and I've heard about people reconnecting and having relationships and I thought I could end up happier with someone from 20 years ago.

“Do you look the same?” my very old friend asked.

He is a musician. He has women flinging themselves at him. I know this could sound like I’m bragging but he said that I am beautiful. Of course any man will reflexively tell a woman she is beautiful because it is good manners, and while it shows that he is kind, my very old friend is also a charming magnetic player. He is both available and unavailable.

“I have always loved you," my very old friend said.

“I didn’t know how you felt back then. I thought we were just friends,” I said stupidly.

We texted each other and I tried my best to act like a normal human being, but I wished I could get inside his head. A few weeks of increased happiness—I was sober but I felt drunk—and then silence.

For all I knew he was fucking a 25-year-old. I hoped I'd look better after he got it out of his system but I did not. It's likely I was traded in for a shinier model.

These last long shots—Neil and my very old friend—have made me realise that I'm happy enough on my own. Despite popular wisdom I think the answer is to be even pickier rather than less so. Christmas by myself or New Year’s Eve at a party with a bunch of couples is miserable, but I like watching whatever I want on TV and I don’t mind going to bed alone.

My very old friend lives on the other side of the world and he gets excited about obscure horror movies, but I'm sure that if I had the honour of being with him I’d twist like a pretzel to love what he loves. Ugh! 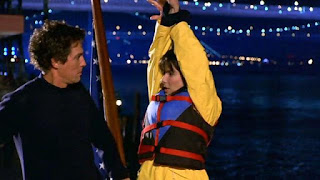 "And I'm not talking the straight kind. I'm talking, like, the twisty kind. Twisty like the bobcat, salty type of pretzel. Because that's what men want, right?" -Two Weeks Notice, 2002
Posted by Juli at 5:29 PM

Email ThisBlogThis!Share to TwitterShare to FacebookShare to Pinterest
Labels: I want to know why., movies, resolutions, separation, wine

You are strong and whole, Juli. Smart, too.

Thanks Sarah but I am still probably dumb enough to give up all the good things about being alone for the wrong person.

I love your writing.

Thanks Alexandra you are so kind!

Jenny from the cellblock said...

I feel you, darlin'. xoxoxoxo