Okay, I admit it. I love our new windows.

When we first moved into our house, there were French doors. I liked them.

But in winter, the wind blasted into the house, through not-so-charming cracks under and around the doors. 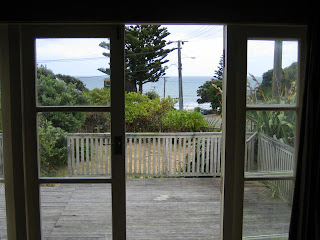 Charming French doors. So retro.
Last November, the night that Pres. Obama was elected, there was a gale. Up the coast, we have gales all the time, and we think nothing of it.
But this gale was special. It ripped the latch from the bottom of a French door, whipped the door open, and two panes of glass broke.

We were going to fix the door ourselves, but the door was buggered.
The husband boarded up the broken windows with plywood, and we lived with the windows like that for SIX MONTHS while our landlords tried to sort out a solution. 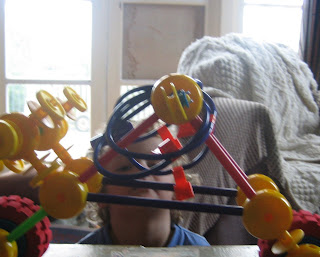 Yes, we are the kind of tenants that landlords dream about.

A week after we returned from America, holes were chopped in the house, in the rain and cold, and at last new windows were put in.

The French doors were replaced, and we got a totally unnecessary new side door and new windows in the kitchen, the lounge and two in the bedroom. Double-glazed windows. Six of them! 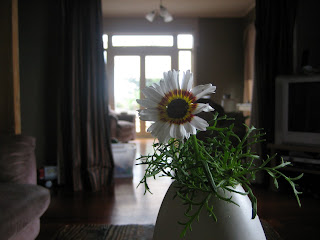 The job was a bit rough. And the landlords were disappointed with my efforts to feign gratefulness. I'm such a terrible actress.
So the husband has been hired on to clean up the frames and paint and such. We still have all the old glass and old frames scattered about the property. The husband insists all the rubbish might come in handy for something. Kiwis! 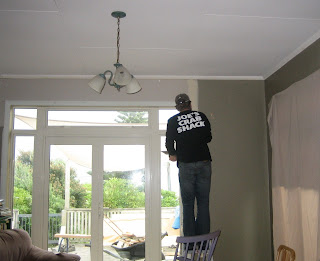 It still looks like a building site. And we're using a slip cover for a curtain.

But over the last few days, when the wind has picked up, it hasn't been blasting through the house. And we haven't had to close the curtains at night. Because, hey! The windows are double-glazed. 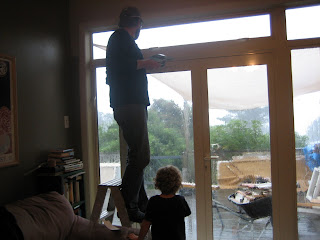 Double-glazed windows. All kinds of awesome.
Posted by Juli at 8:46 AM

New windows rock! We live in an old (100+ years) farmhouse and we are replacing the windows one by one.

we got new windows last year...they were single-pane and in the winter you could feel the wind right THROUGH them. aaaah...love new windows. and yours are gorgeous!

seems to bring in lovely light. not to mention some of the view I spied! sweet!

Do you have Joe's Carb shack in NZ? And just how cold is it?

Andrea, no, there's no Joe's Crab Shack in NZ. Adam's shirt is a souvenir from our trip to the USA.

It doesn't get THAT cold where we are. In winter 40s and 50s. It's the damp, and living in a wooden shack!