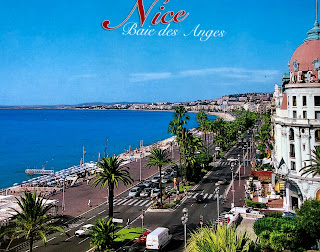 Here is a little excerpt from a work in progress, a novel that I started writing over 25 years ago. Working title, AN AMERICAN IN FRANCE. In this chapter, our heroine is visiting France for the first time.

She slept in late. Then she went to a cafe to eat a brioche and write in her journal:


...Even though I'm not religious, yesterday was Palm Sunday. I went to mass at l'Eglise du Sacre-Coeur. Outside the church people were buying green boughs from vendors to make bouquets.When people went into the church, they dipped their hands in a little bowl of holy water, touched their foreheads, and made the sign of the cross in front of Christ at the altar. I did this too.There were some saints along the sides of the church. Some people said prayers and lit candles in front of the saints. The church was very striking. L'Eglise du Sacre Coeur is an imposing chapel made of stone, with an arched ceiling that rises five or six stories above your head. I sat in a pew in the back of the church and listened to the mass. I understood the words, but the ritual was lost upon me. I thought there was too much standing up and sitting down...

As she was writing, an old man sat down next to her in the cafe.

"Are you a virgin?"he asked her in French. "Would you like to make love?"

She ate dinner at a small seafood restaurant on the Cours Saleya with a couple of Italian boys that she had met earlier at the fountain. They spoke in French, but one of the boys only spoke Italian, so the other boy had to translate for him.

She had a kir. She hadn't ordered it, but she guessed that an aperitif must be complimentary. She placed her order from the menu fixe. The soupe aux poissons was excellent. A rich, creamy soup with a rouille (a spicy mayonnaise that she spooned into the soup) and freshly shredded mozzarella served on the side. Also baked croutons for dipping into the soup. For the main course, she had the poisson du jour, and the plate presentation was incredible, with marinated pieces of fresh fish in a basil tomato sauce, served with rice with peas and carrots.

She ate an entire chocolate mousse by herself. A piece of wafer or homemade shortbread came with the mousse. Coffee of course, and l'addition. She told the waiter that she had enjoyed her dinner. He replied that she was sympa, very nice.

After dinner, she and the Italian boys went to an English pub where the beer was expensive, but luckily, the boys were buying. The music playing was silly old American and English songs. After a while, she became tired, and the boys escorted her back to her hotel.

At the hotel, she sat in the salon for a few minutes to catch her breath. She chatted with the desk clerk, who was a young man about her age. Together they watched the end of a French western. There was an advertisement for INDOCHINE, and she told him that she had already seen it in America. He seemed impressed.

I just realised that yesterday was Palm Sunday, and next weekend is Easter. In New Zealand, we are on Day 11 or Day 12 of the Level 4 lockdown. Where can you buy Easter chocolate when you're quarantined, and there are no options for online delivery? 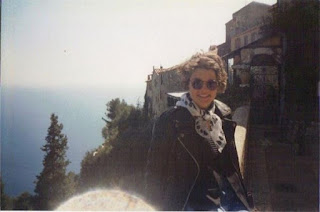 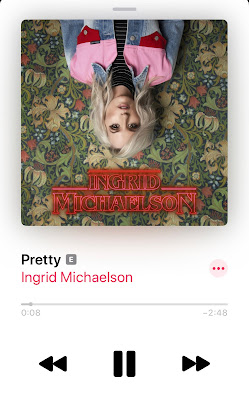 It is a truth universally acknowledged that when the world is going to hell in a handbasket, I’ve been lucky enough to be an outlier.

As many people in New Zealand face unemployment during a pandemic, I may find myself back in full time work very soon.

I am one of two candidates in the final stages of an interview process. Before the lockdown began, I survived a panel interview, and today I completed an assessment exercise and the paper work for police vetting.

This would be a dream job for me, doing work that I was born to do. As is usually the case, it will probably come down to “fit”, but I’m really hoping for an offer.

This job is very much in line with some of my career aspirations as a younger person. At the very least, I finally know what I want to be when I grow up.

Thanks to all of the teachers in my life, I have the skills, experience and knowledge needed to take on this challenge and to be effective in this role.  THANK YOU.

Update: Recruiter said that I'm not the "preferred candidate" for the job.  There's still a small chance that I could receive an offer.  It might not work out with the other person, they might turn down the job, for example. And if this happened, I'd receive the next offer.  I didn't stuff up anything in the interview or in the assessment, it's just a matter of different skill sets and "fit" apparently. The other person has skills that I don't have, although it wasn't explained what those skills are.  I'm disappointed, but everyone is unemployed, so I'm not going to complain. In happier news, I dropped my phone in the kitchen and the screen didn't crack or break.
Posted by Juli at 1:41 AM No comments:

Welcome to the apocalypse. 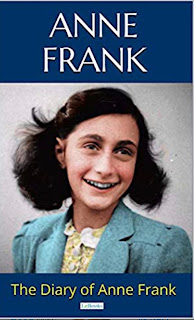 Hi friends of the blog, how are we doing?

I’ll start. I have the privilege of living in a country that is making the tough calls and I one hundred percent agree with the interventions that we are making to confront this pandemic. If anything, I want us to go even harder. (Hello, at least 80% compliance rate needed for success!)

As someone who's worked in health for the last five years studying towards a MSc in health psychology this shit has been fucking terrifying. But enough of the doom and gloom, am I right? You're getting enough of doomsday elsewhere.

Here’s my confession. Last night I had a meltdown. I was so frustrated when I couldn’t use Airdrop then text that image file from my phone, I felt absolutely and utterly defeated, and I ugly cried. All of this change including the change from analogue to digital is some heavy shit. And I realised that I’m a dinosaur. Which was a wake up call.

So I decided to change my life. No more obsessing over every breaking development in the news, put the phone down. Today I woke up and I hid my phone. I started the day with yoga and meditation. Then I wrote a list of things to accomplish today.

Here's the thing. We the people need to create a beautiful life in our homes. Some of you are likely already doing this, but I just got here on Day 11 of isolation.

Good things I did today:

2. Wrote a pitch for a news story about the troubling situation going on in the US Embassy in NZ.

3. Started an UNO tournament with 14. We will keep playing until the end of the 4 week (or longer) lockdown in NZ.

4. Got out the good art supplies.

5. Practiced a song on the piano to perform for my nieces and nephew when we FaceTime tomorrow.

14 is going to play the song that he did for his electric guitar/music assessment last year.

6. Had cups of tea and yummy food and had a nap.

7. Video and audio calls with friends and family.

8. Started sorting my home so that it is better organised for work and study.

10. Started a written journal, on paper.

I feel like I’ve been screaming into the void for my whole life, but now is the time to get creative and live the best life we can in these circumstances. I will try to keep updating. Love and strength to you all. We will get through this together. Kia kaha (stay strong)

PS. If you are living in America, please I’m begging you stop watching Tr**p’s pressers. Just turn it off. If he ever says anything true, it will be reported and you will learn about it soon enough. You do not need to bear witness to this propaganda. The networks can’t stop airing it altogether because doing so would set a horrible precedent for future presidents. But we the people can choose not to watch and listen to Tr**p. Tune out. Choose your news sources wisely and read from many sources. Think critically. Take care on Facebook and Twitter and Instagram where there are bots and trolls and algorithms and sponsored posts seeking to divide us. xoxo
Posted by Juli at 9:13 AM 2 comments: