On the morning Eight broke his foot, tensions were running high. Eight had just had a tantrum because I (accidentally) turned off the TV. I was in the kitchen packing his lunch, and Eight was stomping around the piano room. He banged his foot (hard!) on a chair.

Tears. Lashing out. He was in a lot of pain. Something was wrong. I ignored it because I was able to soothe him  – I mean, I desperately needed him to go to school. He could wiggle his toes. So, he put his shoe on his hurt foot, and he hobbled off to school. His limp was another sign – nobody could “Hollywood” a limp like that, but I ignored that too.

By the time I picked up Eight from school, his shoe was off, and he couldn’t walk on his foot anymore.  I had to drive to his classroom door, but I was still in denial – I didn’t want him to have a broken foot – I had too much to do. There wasn't even any bruising.

And I was impatient, eager to get back to my work. “Come on. You're grumpy because you didn't eat your lunch. Let’s go home!”

Eight was trying to hold it together, but he was nearly in tears.  It hurt so much. I took him home, put an ice pack on his foot, gave him an ibuprofen.

"Do you want to go to the doctor?"

I sullenly accepted what had happened. Bloody hell, I had to take him to Team Medical. We had to answer a lot of questions about how had Eight hurt his foot. While everyone was asking Eight questions, I held my breath.

“I was really mad at my mum,” Eight said.  “She turned off the TV, and I was still watching it!”

Mostly I felt grateful it was only a minor injury. Even if I felt guilty for falling short. I should have known sooner. Been a better mother that day. And for the next two weeks, while Eight was lugging that heavy cast around, being careful to keep it dry, zipping along on his crutches, I felt like I was never going to heal.

The day Eight's cast was taken off, I had an exam, so I didn't get to see how small Eight's foot looked. But I'm writing this now after another long absence on my blog because I want to remember how excited Eight was to show me he could wear a trainer on his broken foot again. I'm also trying to remember we are all human, and what's important in life. Because it's fragile and goes too fast.

And in the mornings, I don't mind if we're running late because Eight wants to watch TV for a few more minutes, or whatever. I really don't. 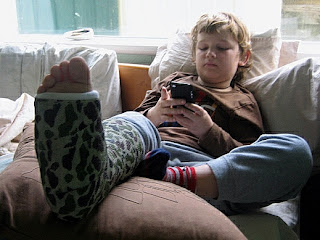 Oh, so sorry. We all have had these moments. I've said things like "we don't have time for you to be sick today!" it's happened, dear J. xo HOPE HE IS UP AND RUNNING SOON!

Eight is FINE. He's running around, almost like nothing ever happened. I mean, no sports for six weeks. But FINE.

If I had kids, I would probably be the same way. Plus it's hard to tell how much of a big deal a kid makes of an injury, how bad it truly is. I'm sorry he hurt his foot but I hope it taught him a lesson early on about losing his temper. Someone else I know never learned the lesson and I blame his mother.

2 posts in the past year and a half?! I've missed your writing so much. I know you have no time but do you miss it at all? I hope you someday return to blogging, Juli! :-)