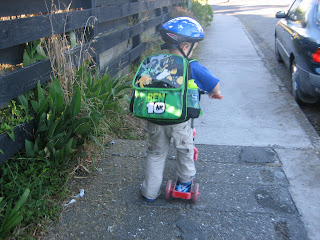 In New Zealand, you start going to school after you turn five years old. That's right. The day after your fifth birthday. (Don't ask me. I guess it's a British thing.)

When you start school, you are called a new entrant. I gather that the new entrants' class is like kindergarten in the US. (I just don't get the NZ school system.) But you stay at school from 9AM until 3PM. (The entire day.) This seems long for a five-year-old. I mean, just look at the little boy in the photo. Can you believe anyone that little goes to school?

Anyway, the child is almost five years old. I should give him a pseudonym. Like, Elvis. (It's not a dumb name. I don't care what my husband says.) For the last few Fridays, Elvis has been going on school visits. He's doing so well. And I love his teacher, which is a plus. (I hope it's a love that will last. Maybe I should bring her chocolates.)

The big surprise? The transition to school has been difficult. For me. (You're surprised, right?) I’m happy for Elvis. I'm so proud of him, as he achieves this next step towards independence. But, at the same time, I feel depressed. I used to hear about the empty nest, and I thought it was dumb. (Of course, I was a teenager. I thought everything was dumb.) The first time I dropped Elvis off at school, I cried.

I feel better now. But why does everyone tell you parenting gets easier? They LIE. (Unless you, reader, are a new parent. Then, it’s true. It gets easier. Really!)
Posted by Juli at 4:54 PM

I've had harder adjustments to my kids going to school than they ever did. I think it's normal. Or at least that's what I"m going to claim. Normal.

I gather that NZ is the only country in the world that does it in this rather odd way. Even some born-and-bred Kiwis find it a bit odd and don't like it when they are the parents sending their brand new 5 year olds off to school. What lots of people don't realise is that they don't legally have to go until they're 6, but the cultural pressure to go at 5 is huge! Hazel's off in 5 months and I'm dreading it but know I'll so proud of her too.

New Entrants is the equivalent to Junior Kindergarten in the US & Canada. Year 1 is Kindergarten.

I actually LOVE the system of starting them after their 5th birthday. It DOES take some getting used to, but I love it.

He'll get used to the long day.

There are lots of things I don't understand about the way NZ does stuff, but I'm glad I don't have to worry about becoming 5! You'll both be ok!!

Everything after about noon is basically daycare anyway.

In CA we have preschool, which is about 4 years old and more socialization than education. It's short in hours and a good transition for the kids. Then K is 5 years old (4 hours a day) and 1st grade is 6 and so on.

It doesn't get easier. Whoever said that is insane.

I want to believe it gets easier. My daughter starts kindergarten in the fall. I guess I'll see.

When I took my older daughter to kindergarten on the first day of school, I was pleased that all my prep work was a good thing for her. She kissed me good bye, skipped off and never looked back. I cried.

Elvis is only the best name EVER. I use it in my blog to talk about the only man I ever loved. Then about 3 years ago I told him I used it in my blog and now I'm afraid to talk about him again. Even tho I'm pretty sure he doesn't read my blog. Just glad I don't have a 'search' feature on it.

Blog of the day, huh? Thanks.

No, it doesn't get easier, and sometimes I still cry.

Many schools in the US have transitioned to a 'full day' kindergarten... fyi. I don't necessarily agree with it, but it has happened here as well. And, no, it does not get easier. I feel your pain Juli... my two boys will be starting MIDDLE school and HIGH school next year... each of those is traumatic enough by itself - to have them both happen at the same time... too much!! And yet, THEY will do just fine - and are both looking forward to the changes. I, am not.

Wishing you both all the best with the transition to school. I found the first term really hard :( But I tried to console myself with the thought that in the UK they start school at 4!!!

It took my daughter a term too and I considered pulling her out and home schooling several times, but by the second term she really started to enjoy it.

I cried on my daughters first day as well! She loved it and I am still not used to it - my husband has to stop me giving her days off when I miss her too much.
The NZ system is much better than the UK one. They start at 4 in the UK and all on the same day in September.

this one was hard for me, too. esp. with my second (my last).

you're right. it's different kinds of hard at different stages.

I've been thinking about you and your nb and wanting to give you hugs.

You know what kills me? My kid turned six and she wanted to stay home from school and I had to say no. For one thing, they are harsh on any absences and make threats to the parents. It's like the hard, cold world starts at FIVE.

FIVE! She has homework at night. WHAT THE HELL? She's already taking a placement test to get into another school. This is INSANE to me. She should be playing and napping and eating snack and learning a few things here and there. Instead, she's supposed to be reading and writing and doing arithmetic. MADNESS.

It's crazy watching them grow up. I've spent more time with her since she got into kindergarten than I have since she was a baby, due to the lighter work load I'm having...but seeing her grow up is both beautiful and amazing and heartbreaking and so many things all at once.

I want her to get to eat candy, go to the park all day, and all sorts of indulgent childhood things. But in this world, I just can't. She wants to hang out with me all the time now (and with papa) but she and we just can't.

Kia ora Juli,
I have been here 17 years and I still don't get the school system. Not being a snotty American but the old grade system progressing to freshman, sophmore, junior, senior seems much easier than form this or that.
And no, with one boy about to be 17, and the other 7 I don't think it gets any easier. Oh well... Kia kaha.
Cheers,
Robb

So sweet! They always look so cute as they go off to school. All stops when they hit six though. Just a slow decline to teenage truculence. I am reliably informed of this by my mother.

oh elvis. I love your safe head in the helmet.
soon it will be full of really great stuff and really useless stuff and it will be kissed on by girls and batted at (ok hopefully not, but..) by boys.

You're five and you're ready for the next step little man. I'm really happy for your and your beautiful mom.