My love-hate relationship with Ohio.

A friend in the village told me that she has been to Ohio.

Columbus, Ohio is my hometown. Lyrics about going home always make me think of Columbus. I am nostalgic for its neighbourhoods, and its bars, cafes, and galleries. But when I was growing up, I couldn’t wait to leave Columbus. Opportunities seemed so limited, and I heard the call of the big cities.

It has been nearly two decades since I lived in Columbus. Sometimes I am annoyed being from Ohio is STILL one of my defining characteristics. Provincial Ohio and its cornfed jock Midwestern values—I am too sophisticated to be from Ohio! (OK, not really.)

I have a love-hate relationship with Ohio. In my teens, Ohio seemed like a battleground in the culture wars. Ohio State (which was then the nation's largest university) helped make Columbus a progressive city. But at the same time academics and artists were criticized by deeply held pockets of the conservative right, and accused of undermining traditional “family values”.

Ohio is a state full of contradictions. With its industrial and rural regions, Ohio is part Northeast and part South, part booming suburbs and part struggling poverty. With a population of 11 million, it can be a Blue State, or a Red State.

--
Recently I was upset by a New York Times article about my fellow Ohioan, House Minority Leader John Boehner. In the article (“Boehner’s Path to Power Began in Small-Town Ohio”), Mr. Boehner is practically anointed by the New York Times as the next speaker of the House. 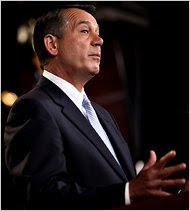 “Can't we just have the election first?” I grumbled to myself while I skimmed the article.

But in spite of the article’s glowing descriptions of Mr Boehner and his humble origins, it did point out a couple of uncomplimentary things about him—like his perpetual orange tan, and his penchants for exclusive country clubs, designer clothes, and fine wines.

Mr Boehner is closely allied to corporate industries like mining, and to a tightly knit group of lobbyists. He claims to be able to cross the aisle to get things done in Washington, but so far he has been a rabble-rouser in "The Party of No".

Although the New York Times article portrays Mr Boehner as a “small-town boy from rural Ohio”, he actually is from Reading, a suburb with a population of over 11,000 in metropolitan Cincinnati. Mr Boehner’s upbringing, as described in the article, is middle class, not rural.

Lately the mainstream media has been focused on the re-emergence of the culture wars. I wonder if depicting a suburb as a small town is an attempt to fold “rural” and “small town” with the middle class, especially since the culture wars increasingly are being waged between rural and urban districts.

Columbus - nice place to live, but I'd hate to visit there.

I have SO many ties to Ohio: I was in Montpelier the day Richard Nixon resigned. One of my boyfriends was from the Toledo area, and I met him in Cincinnati. I once spoke (badly) to a Gay Pride rally in Columbus. I was, in other words, on the right side of the culture wars you described.

As a born-and-bred Midwesterner, with so much personal connection to Ohio, I can't write off the state, despite its electoral troubles over the past decade.

And yet, I can promise that John Boehner does not and never will speak for me—no way, no how.

I have my ballot from Illinois. I will vote. It's obvious, but I'll vote Democratic—and I can't imagine why anyone would vote otherwise. I want the entire Midwest to vote as I do, but I know much of it will not.

The culture wars are far broader than many suspect, so I applaud you for the way you approach them. I wonder, though, how much voters in Ohio (or the Midwest generally) will get that they're being played for fools by the corporate elites who really run the show—AND John Boehner.

Of course, I, too, have a love-hate relationship with Ohio. Although no one ever says that MY hometown is ugly. :)
I alternate, frequently, between bashing and defending Ohio. But it's so much a part of me that I can't separate myself from it either.
And, in case you were wondering, I'll be voting a straight Democratic ticket here in Vermont.
O-H-I-O!!!!

I lived in Medina, Ohio for two years when I was a teenager. I thought it was pretty, especially in the country. We visited Amish Country in OH once and it was quite lovely. :-)

The entire state legislature should be elected by Cuyahoga County.

I feel similarly about Florida, my own conflicted home state. (Which has a lot of "transplants" from the Midwest, including Ohio!) I'm always the first to defend it and the first to run it down. I'm sorry it's Wait-You-Ain't-Speaker-Yet Boehner who's calling attention to your state right now.

Voting Democratic in NYC. I don't always vote straight D, but this year, anything else seems unthinkable to me.

I suspect that we all have a love/hate relationship with our home town. I'm from Glasgow and it appalls and enthralls in equal measure.

I don't think a visitor/tourist can ever really get the full measure of a place. I'm sure you home town will always, quite rightly, hold good nostalgic memories for you.

You voted in California?!! That's awesome. I'm in California. God help us if Meg Whitman manages to buy the governorship. That's great that you got to vote for Pelosi. I'm in the central part of the state so not in her district. We'll have to compare ballots. I'm voting Yes on 19 to legalize pot for personal use. If you ever come here, we have got to have a visit.

Good on you for voting. It seems like it would be easy to skip out on our electoral duties when we're so far away, but it's important. Thanks for sharing your thoughts on Ohio. I'm voting a nearly straight dem ballot in Kansas, although I'm in quite a minority there.

Jayne - you got to vote on a measure for pot? That's way more exciting than anything on my ballot!

Hi there! I love Ohio! My brother just moved to Canton last year and I spent a month there over the summer! There is so much to do and enjoy! I am going back for 10 days for Thanksgiving. Can't wait! Thank you for the comments on my recent post. No major depression, just been a little down. Doing much better! Hope you have a fantastic day honey! Kori xoxo