Notes from a country bumpkin.

Ever since I read this article, I have been thinking about how vulgar and country-bumpkinish Americans are. (This is obvious to everyone outside America.) Geoff Dyer, the author of the article, claims that nonetheless Americans have a certain charm. He admires how Americans aren’t afraid of being overheard. (This is just a polite way of saying Americans are too loud.) And how Americans are polite. We are overly polite, actually. So many pleases and thank-yous. (No, these good manners are not a sign of sophistication.)

After the naughts, I am still feeling fragile. I am not as ashamed of being an American as I used to be. But I’m not exactly proud. Americans are supposed to be proud. (Go USA!) And a real American would not want to live outside the U.S.

For the last eight years, I have been juxtaposed with stoic, mumbling Poms (Kiwi for English people), who can’t quite conceal their loathing of vulgar American me. And I used to think the problem was me. I am too introverted. There is so much social awkwardness in my most mundane attempts at conversation. I used to be a waitress, so why can I not (at the very least) plod around bringing people cups of tea? And why can’t I have aristocratic manners like the Duchess? (I look like her, don’t you think? No? Adam doesn’t think so either.) 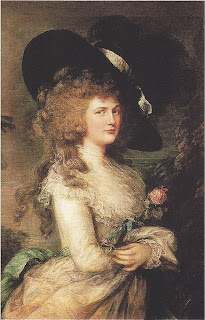 I have finally realized the problem isn't my personality. And it isn't my upbringing. My socially awkward encounters are because of the inferior stock of my ancestors. They were the underclass in Europe. They were probably serving maids and indentured servants. (OK, some were escaping famine, or wanted religious freedom.)

It’s not a surprise (or my fault) that Americans don’t have aristocratic manners. It's not in our blood. And yet. Maybe, just maybe, the problem is actually the Poms' class loathing.

“I could have told you that,” said Adam.

--
Edited to add. Most of my friends in NZ are, uh, English (perhaps of a certain class). Look out for the next article in this series: New Zealand, the Great Egalitarian Society That Isn't Really.
Posted by Juli at 1:44 PM

Email ThisBlogThis!Share to TwitterShare to FacebookShare to Pinterest
Labels: backstory, I want to know why., Kiwi culture, village life

Interactions between various nationalities are always interesting. I remember when I did my OE and was thrown in with a bunch of Poms, Aussies, Yanks and Canucks (well I was always around Canucks to be honest) with a stray Scot or South African thrown in. We like to stay British Empire-centred I notice... Anyways, the Americans were very open and we all knew their life-histories within a few hours. They were blissfully unaware of any tensions or undercurrents and thought Canadians were their best friends. The Poms were ultra-reserved for a few days until they decided you were ok, after which they drank copious amounts of beer. Eventually they would refer to us as "colonials" and we'd call them inbred and things would go from there, usually in a fairly friendly way. Then they'd tell the Americans the Canadians hated them and the Americans would look like puppies who had just been kicked. I remember the Irish girl crying a lot and the S. African got a lot of stick about apartheid. Not entirely sure what everyone thought about Canadians, I had the impression we were regarded rather neutrally and perhaps without much national character! So the next time a Brit pulls the colonial crap you just bring up the inbred thing. Seems to work a charm.

As a "stoic mumbling Pom" I also find the interactions of different nationalities really interesting. I have found that the main problem I face in NZ is that people are really really friendly and want to know all about you and expect to be invited round for coffee at the drop of a hat. I initially found this a bit difficult to get used to (having previously been used to not talking to my nieghbours in the UK or anybody for that matter that I hadn't been formally introduced to!).But now I actually really love the fact that I know and chat to everyone and barely a morning goes by without popping round to someones house for a chat.
We lived in Brussels previously, which is a real international community. I made friends with a few other American Mums and we got on fine until the election came up and I ranted on about how great it would be if Obama got in and how awful Sarah Palin was. I subsequently discovered they where staunch republicans!I found that the Canadians and Australians I met were not vastly different from the English - just less reserved.

It's so human go categorize folks from different regions, nations, races and ethnic groups. What a person will typically do, I think, is have an experience with one or two who qualify as whatever, and then that person will project whatever aspects upon an entire people. It doesn't seem to matter if it's true or not, it is repeated as gospel and mostly without any qualifiers or disclaimers whatsoever.

The second level of this categorization, which by the way how our brains deal with impossibly large amounts of variants, is the twisting of those experiences to match pre-conceived notions.

John went to Canada. The two Canadians he met were very rude. John goes back and tells all his friends that Canadians are rude. He goes to Canada again. This time no one is rude to him, but no one talks to him either. Nevermind that these particular Canadians speak French. He associates the French language with rudeness and goes back and has more stories for his friends. His expectations of rudeness continue and his resolve hardens until everyone who he comes in contact with knows how terrible Canadians are.

It's a ridiculous example of course, but it is absolutely how we work. Same with politicians. A person of the other party, as a rule, is incapable of making a good decision about anything. This is quite impossible, but it is sadly how political discourse is approached in my experience. Which, even more sadly, makes political conversations meaningless and unproductive.

I try to avoid generalizations as a rule and live my life treating individuals as such. I don't always succeed, or maybe even mostly succeed, but I always try to leave my categories at home.

Interesting topic! And why do we Americans say please and thank you so much? I noticed that when I went to Asia as a teen. I was trying to be a polite American (although this was pre-GWB) but I'm sure I came off as a loud teenager with a nervous habit of saying "thank-you."

Interesting topic. Do Americans really say please and thank you more than other nationalities?

When you say "American" what do you really mean? It is a big country with many regional differences, and many people born in different countries. Many I need to live outside of America to appreciate your point of view more, but it seems as if there are more differences among individuals in America, than similarities. Can a Jewish professor in New York, a Mexican-American teacher in LA, a home-schooling mother living in a trailer home in Idaho really be listed as having a similar American trait?

I think you look just like The Duchess. I don't have good eyesight though. We are what we are and that's all that we are.

This is one real American who would very much like to try living in another country. :-)

I agree with Neil that there are differences among Americans. Some are loud, some aren't. Some are extraverted, some (like me) are introverted. Some have good manners, some don't. And so on.

One thing I have heard Americans are known for is their confidence. I would hope this comes off as something admirable, rather than pushy and rude.

Although, I must say arrogance can easily be confused with confidence, and is not something I'd like to be known for (which may explain all of the pleases and thank yous).

I have to admit I haven't met a kiwi american country bumpkin yet but we seem to have alot of poms and south africans living up our way, we live in a small northland town so they tend to stick out...

It is an interesting post and sparks lots of thought and conversation. It is interesting to hear some people say Americans are ----------. Whatever it is, all Americans cannot be that. I remember before I went to Paris, American friends telling me that French people were not nice to Americans and to expect them to be rude to me. I did not find that to be at all. Maybe it was the way I spoke to them and approached them, but I had a wonderful experience. I know some Americans have given the impression in other countries that all Americans are wealthy and bossy. And we know that is not true. I like posts like this that get us to think about how we treat other people.

Shit like that pisses me off. You are who you are. Don't apologize or feel bad for it. And if any Aussies give you shit remind them that their country started as a penal colony.

I'm not sure if Americans are genuine in their manners any more than anyone else. It seems more practiced than anything else.

Interestingly, I found that article more disparaging of British than of Americans. Like Neil said, America is such a big country and although our citizens share a common mass or pop culture (one that is shared with much of the world), regional, ethnic, socio-economic, etc. variations really do make a difference.

The non-American expats here seem to have varied opinions of Americans. The first Swedish woman I met told me that Americans are very friendly but also shallow. Okay. And then someone else told me that Swedish people are cold at first but once they let you in, you're friends for life. An American told me that British people tend to hold grudges. And then a Belgian woman said the Dutch are .... And an Italian accused the Swiss of being ..... And on and on it went. You see?

I don't think you should feel like a country bumpkin. I don't even know what that means.

There are probably a thousand variations on the basic American theme, but I've found one thing in common: they are almost always entertaining and interesting people. Americans are curled up in the warm bath of the American myth. The result is a strange absence of irony at the core of their character, which means that they grapple with issues seriously and unashamedly. The downside can be a lack of introspection and a total ignorance of how the rest of the world views them.

I'm engaging in a pretty massive generalization here. But I can tell you this: America makes being Canadian fun.