Today is Father's Day in the U.S.

I rang my father. This year, I'm really on top of things, I said to myself.

When my father answered, he said that it wasn't Father's Day yet. Apparently, I had jumped the gun. I was a week early.

The week passed. I mixed up the date of my parents' anniversary. And I showed up for a potluck dinner on the wrong night.

But yesterday, I felt more confident. I just knew that I had the right day. I got up a bit earlier than usual, so I could ring my father on Father's Day.

As I was dialing my father's number, I remembered. Father's Day isn't on Saturday. Oh, well. Next year I'll really be on top of things. 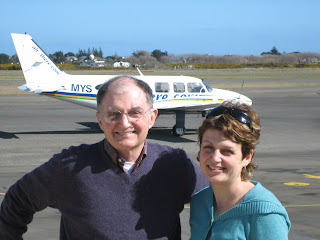 Email ThisBlogThis!Share to TwitterShare to FacebookShare to Pinterest
Labels: backstory, I want to know why., resolutions

That is an adorable picture.

Nice picture of you with your dad.
I think it is a great thing that you were keeping your dad in your thoughts and wanting to greet him with Fathers Day wishes. He would probably be happy with your telling him Happy Fathers Day more than once, even once a week forever, huh.

You know with that new fangled invention you got there called a computer you can look up next year's Father's Day (June 19th) and put it on your calendar program with a 2 week reminder. :D

Awesome pic by the way.

I do believe that it's about now you say that it's the thought that counts.

Good, I'm not the only one who has trouble with this.