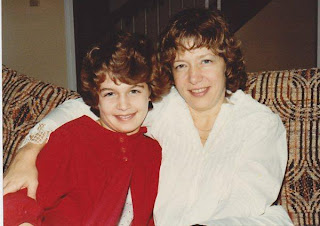 My mother found this photo of us in her archives. It was taken in 1982. In 1982, my mother was just a bit younger than I am now. It’s weird to think about.

In 1982, we saw “E.T.” at the movies. Ronald Reagan was president. In the summer, we went on holiday for a couple weeks to Rehoboth Beach, Delaware with family friends. We had to drive two days in our Buick station wagon to get to the sea. At the beach, we rode our bikes on the boardwalk, and we showered in an outside shower. My shampoo was called “Gee, Your Hair Smells Terrific”. I wrote bad poetry about the ocean. And I promised myself one day I would live by the sea.

I started wearing a bra. Most of the girls in my class already wore bras. I remember it was difficult to persuade my mother (who was a feminist) that I needed a bra. We went shopping with family friends, and I found a trainer bra. I think the size was AAA. I was proud to wear it under white tops, so everyone could see I was (finally!) wearing a bra.

In the summer, my mother drove us around the suburbs in a Corvette. We listened to Prince sing about “1999”, a year that seemed impossibly far away. I became better friends with my neighbour, Sarah, who had gone to Catholic girls' (private) school. She was the same age as me, but more mature. She wore a AA bra and expertly applied makeup. She took me to her family’s house at Buckeye Lake. I tried to get her to teach me about makeup and boys. I practiced kissing my pillow, and I prayed my boobs would grow.

In the fall, I started middle school. (Junior high.) Seventh grade. Sarah became “popular”, and I was an orchestra geek. We weren’t really friends any more. I liked mini skirts, leg warmers, and saddle shoes. I took French, instead of the more practical Spanish. My English teacher, Mrs. Dupler, let me borrow her copy of The Clan of the Cave Bear, a book which was not age-appropriate. (Thanks, Mrs. Dupler.) Mr. Dove was my social studies teacher. He was young, hip, and politically aware. In class, to review for quizzes, we would play a quiz game with real buzzers. Mr. Dove was one of the best teachers I ever had.

--
Edited to add. Tim Dove really deserves a post of his own. Look for the next post in this series, "The Teen Years: An Awkward Time".
Posted by Juli at 5:41 PM

omg that picture is so great. Thanks for the time travel.

Mr. Dove..... Didn't he ask us to send him money after we all became millionaires?

He totally did! He was a great teacher...and apparently there was more to Mrs Dupler than I realized. I rememebr reading The Outsiders and Shane for her class.

That was a nice romp back in time. Gee your hair smells terrific! Hard to believe we even bought shampoo that didn't cost $10 a bottle.

Nice picture and how fun going down memory lane with you.

You sound around a similar age to me, I remember those things too :-)

That's awesome. We are pretty close in age. I can relate to everything but he bra. Even Clan. Thanks for the nostalgia.

Scary, as I remember many of those things so well. Was I ever that young?

Damn! You mean my students could be sending me money??

What a sweet piece and such a lovely tone. It was a pleasure to read. Although I started junior high about 20 years before you did I guess the feelings of young girls at that age are pretty universal. I totally remember that shampoo and the TV commercials for it. How hysterical. That brings back memories -- good ones. Reagan? Not so much.